some things never seem to make sense together, unless you put them all inside a funny afternoon called “going to take photos of an organic avocado farm.”

20 some acres on the top of a hill in Camarillo, the farm has mostly avocados but they also grow citrus, cherimoyas, plums and heirloom apples. their dog Astro is on nature’s Avoderm – he mows like 5 avocados a day, but only the really smushed ones. it’s like veggie roadkill.
and then there’s our dog, who ignores the land o plenty around her and goes instead to greet the bees: 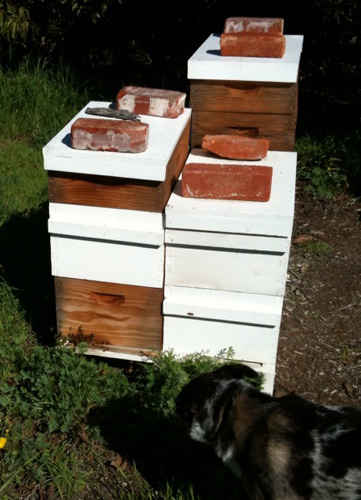 after a walk around the farm (including a little spying on the property next door—noticeably weed free thanks to Roundup), a little knife-wielding tussle between Mr. Farmer and Mrs. Farmer, some scientific Brix testing of grapefruit (theirs reached 11, their neighbor’s a paltry 7.5), we arrive at homemade Ume wine: 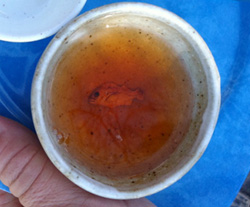 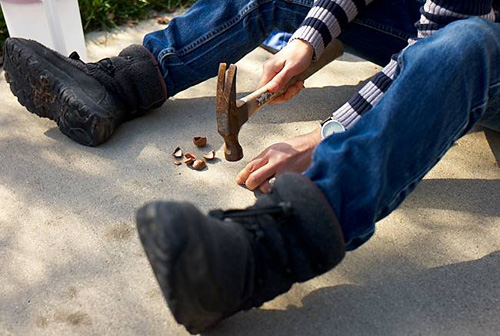 apparently if bees have too many macadamia flowers they will become toxic bees and in turn produce toxic honey. good thing there’s some billion avocado flowers to keep them otherwise occupied.
apparently there is less than one percent of the world’s avocado growers doing what they are doing in terms of bio-agriculture. they have ladybugs, snail eating snails, slug sliming slugs, and an “energy pyramid.” they’re trying to figure out how coyotes, gophers and the weird snake-lizard fit into their ecosystem as well.
they also have the skinny about the other farmers at the market – who’s not a farmer, who’s selling someone else’s fruits and veggies, who’s got a fishy certificate. oy.