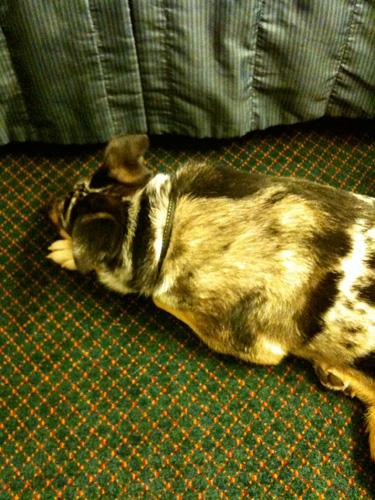 it’s just a sneaking suspicion BUT… it seems like our lovely city/state is so broke a missive went out from someone high up telling the cops to run people down for spare change.
this morning we got a visit from a cop for having our dogs off leash in Pan Pacific Park. there are used condoms in another part of the park and homeless people tossing their empties and random acts of shooting and some guy BBQ-ing his mail and the cop has to come bother us. i didn’t drive so i didn’t have my license so the cop asked me for my info. it went a little something like this:

(i wanted to say the other angie lee’s were probably all korean so they were certainly NOT me. apparently he was checking to see if there were warrants on us. negative, said the lady on the walkie talkie. 10-4.)

there was another weird moment where he looked right at me and asked me my hair color. funny.

he did let us off with a warning, (thank you LAPD – as we were three people with four dogs, we didn’t know whether we were going to get four tickets or three, or even possibly two), and he did toss off the COP attitude after a few minutes and become a real person and we did have a nice chat. BUT – he claimed the ball field we were in had a sign that said “no animals” which isn’t true. then he said “the signs are coming.” (yeah, as soon as we collect some more spare change.)
his other complaint was that kids played baseball here, and he didn’t want kids playing in dog pee and “feces residue.” OK mister, but what part of having dogs on a leash protects kids from said residue? and besides, what about those yoga/kung-fu/kick-boxing fitness trainers doing private lessons in the park? oh, he replied, the city is in a lawsuit about that right now.

after he indirectly asked us to pass the word to other dog-off-leash-park-goers (“do you have friends who hang out here? no.) we suggested him posting flyers at Park La Brea telling the residents about the new crackdown. (there’s a regular gaggle of unnerved apartment dogs from Park LB that gather in PP Park everyday at 6pm.) he was quite excited about this idea (although i neglected to offer to design him a flyer) and we parted ways.

spare some change anyone??