Pu’er might be the only tea that hurts when it hits you, but watch out when the Chinese concept of fate, “Yuan,” comes hurtling your way.

Like Schrodinger’s cat, you can’t go looking for Yuan, and when it does happen, how it manifests depends on your attitude at the moment of its appearance.

Our tea master Vesper Chan had a pretty good nose in 1992 when he tasted a tea that no one else was interested in buying. He decided to purchase the entire lot, some 30 tons of it, at something like 8 RMB a cake. Here’s a photo of the guy he bought it from, after being asked what he thought about the current selling price of 48,000 RMB. 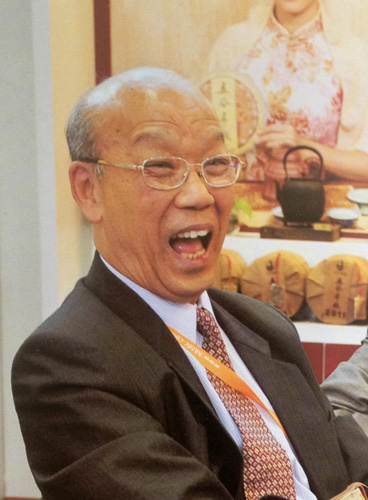 The funny part? Our dear tea master kind of sold his lot too soon, he got the fame of having sniffed out this unbelievable tea, but didn’t score as big as he could have. 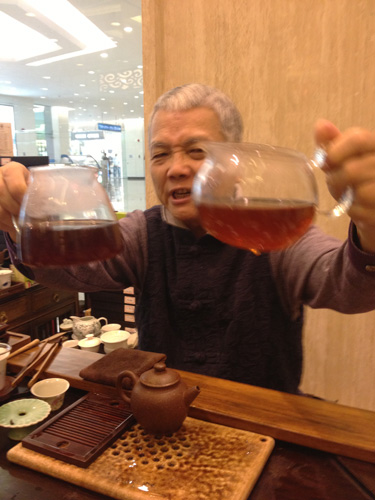 On our recent trip to China last month, my friend Linda wanted to meet face to face with James, the guy who does her printing. He had recently screwed up an order, and she wanted to decide whether to give him a second chance. Turns out James agreed not only to reprint the order for free, but he showed up with correctly printed samples and also offered to take us to the airport.

Turns out James planned for us to taste an organic crysthanamum tea his friend produced, and insisted that checking in only a half hour before the flight time would be okay.

Turns out James was wrong. But he insisted that the fact we missed our flight was meant to be (ahem), as in we weren’t allowed to leave the city until he had a chance to take us out for dinner.

So we got treated to goose-in-a-wok BBQ AND a foot massage.

Here’s how the goose started, 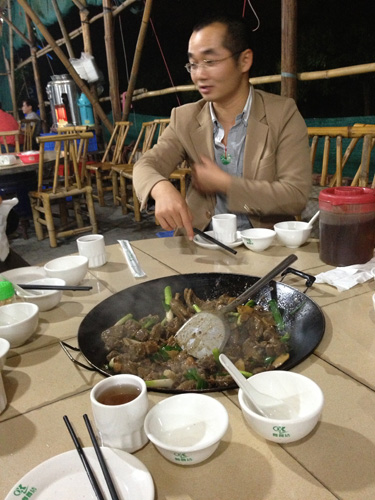 and as you eat it the goose continues to cook until at the end of the meal you’re left with goose and scallions BBQ’ed into pure crispy deliciousness. (That yellow stuff in the bowl that looks like soup? One of the few things in the world I’ve met that I could not stomach. Ug) 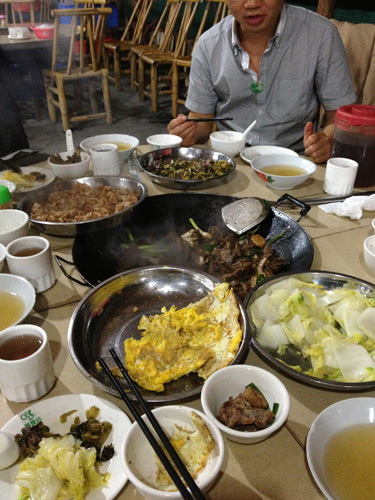 The foot massage played out exactly like the goose BBQ. It started with a neck and shoulder massage, a brief neck-cracking session, twists and backbends over the masseuses’ knees, cupping and foot massage, and then they poured alcohol on a towel on our backs and lit us on fire. 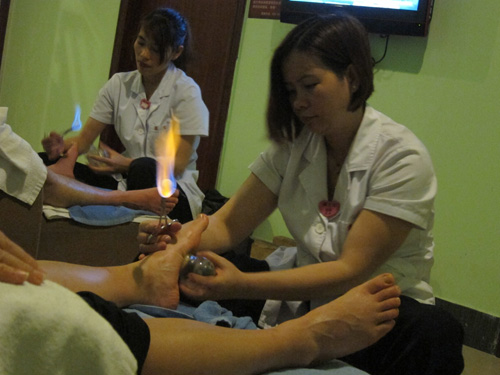 Since we were all on fire, no one was left to document the event, so here’s a video that pretty much captures it. The video also advises against getting this treatment done if you’re “mind confused,” but it’s a little late to worry about that now.

We managed to make the flight to Xixuangbanna on time the following day, and traipsed around the tea mountains visiting some really old trees. 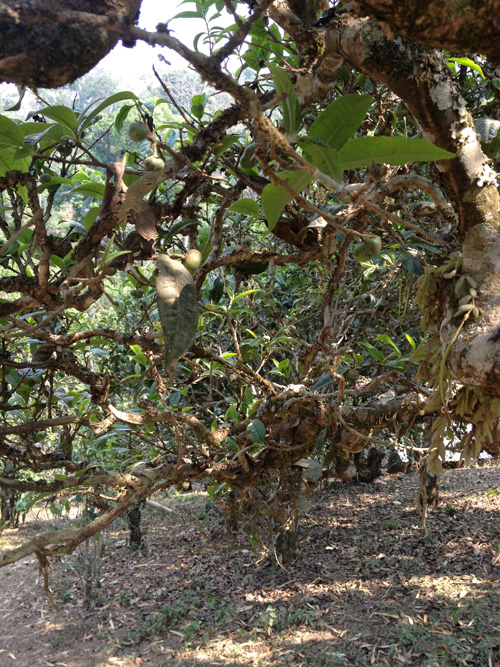 In Nan Nor we bought some loose 2013 Pu’er, and just as we were pondering how we were going to get the fluffy delicate tea back home, we found out that the owner of our mountain inn, Mr. Chen, aka the Chinese Patrick Swayze, just happened to have a stone press for making Pu’er bricks, and he graciously turned our pain-in-the-ass bags of tea into compact bricks. 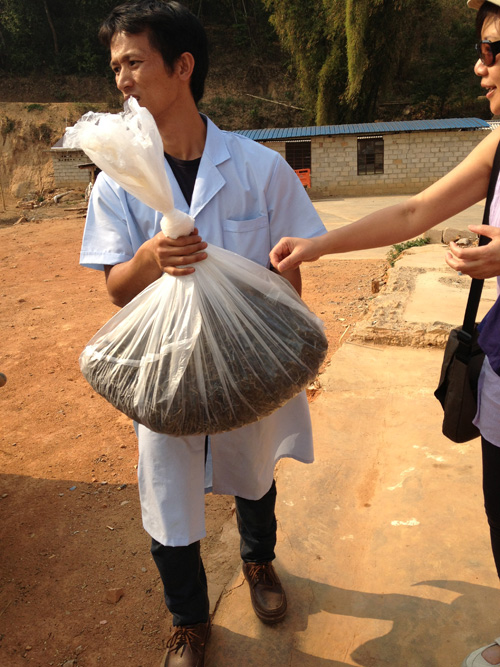 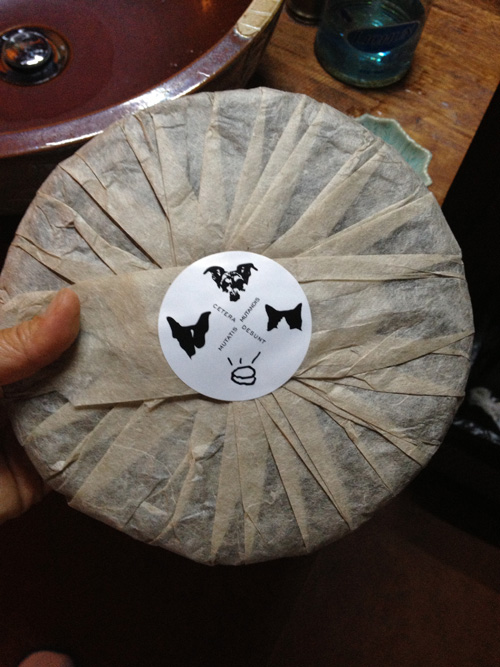 At dinner that night at the inn there was a group of men from the Ai Ni ethnic minority drinking local moonshine and toasting each other (“Sai sai sai!”). I just happened to be traveling with Jeni “Gimme Some of that Moonshine” Dodd so us gals sauntered over to give the other table a toast. This is not what you’d call common in China. Women don’t usually initiate a toast, much less take a drink with a table full of strangers, but hey, moonshine is moonshine.
In return they shared a traditional Ai Ni drinking song:

The evening ended with a some more singing, Patrick Swayze belted out some Dai minority love songs that made Jeni Moonshine cry, Linda showed all of us that if her tea business failed she could make a living as a singer, and Jeffrey played the guitar while reading the chords ad hoc off my iPhone. Turns out everyone knew the words to Hotel California. The look on their faces when we told them that Linda and I were actually from California was pure Y-U-A-N, though I was a little worried the way Patrick Swayze sang “And you can never leave…” 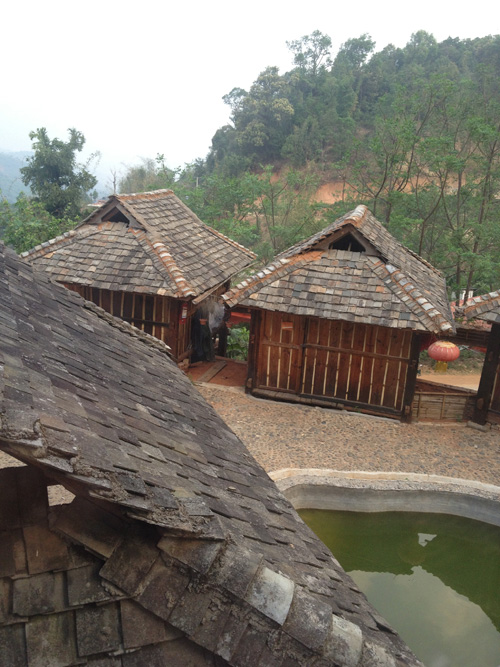 PS. One of the guys was a Beijing official, not from the Ai Ni tribe, and I wanted to ask him exactly why Facebook was blocked in China, but the following morning when I saw him at breakfast he was wearing cute flannel PJ’s so I changed my mind.