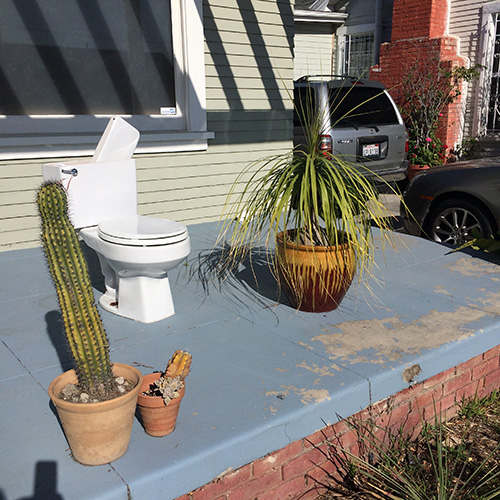 After taking down the crumbling top of our chimney and fixing some hidden gas and plumbing issues, it was finally time to replace the cracked tiles on the fireplace. We originally thought we’d use Heath tiles, being big fans of Edith Heath (and a Batchelder tile fireplace being completely out of the budget). 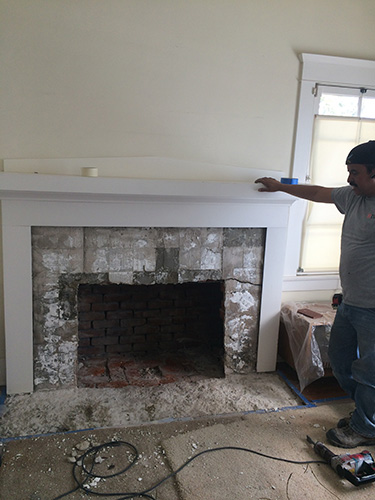 One of the guys we talked to about setting tiles told us “Heath tiles suck,” and we knew the original company had been bought out by a pair of hipsters in 2003, who turned it into a “holistic business model, one that integrated designing, making and selling.” But we went to the showroom anyway. I think the tile guy was talking about the quality of the actual clay, since he agreed that the glazes were beautiful, but we also found out they have minimums for each size of tile in each color, and this minimum is 25 square feet, much larger than the average-sized fireplace + hearth. This means you have to use the same size tile with the same glaze, and then you’ll have shitloads of this same-sameness tile leftover when you’re done.

Not only that, but the really stiff and aggressive showroom lady said to us, repeatedly: “You really ought to try the Our Modern Basics collection. It’s an in-stock offering of two sizes in a carefully edited palette of six matte and glossy glazes. The depth and character of the glazes are classic Heath—refined and contemporary, yet timeless.”
OK. She didn’t actually say that. But that’s what I heard. Whenever someone says they think/know their “carefully edited” selections are perfect for your project (having never seen the house or the fireplace), it’s time to get the hell out of the store.

Lamenting on the way home, I said, “I wish we could just buy from someone who makes their own tiles.” And what do you know, we found her in Pasadena. 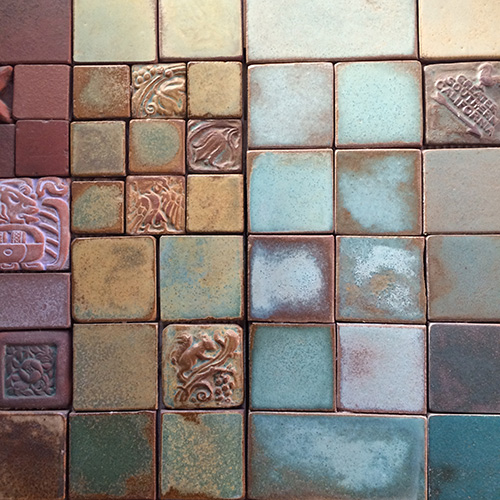 Now that we could have any color in any size in any pattern we pulled out the graph paper and colored pencils. We started with Batchelder designs, and then quickly lost our minds. 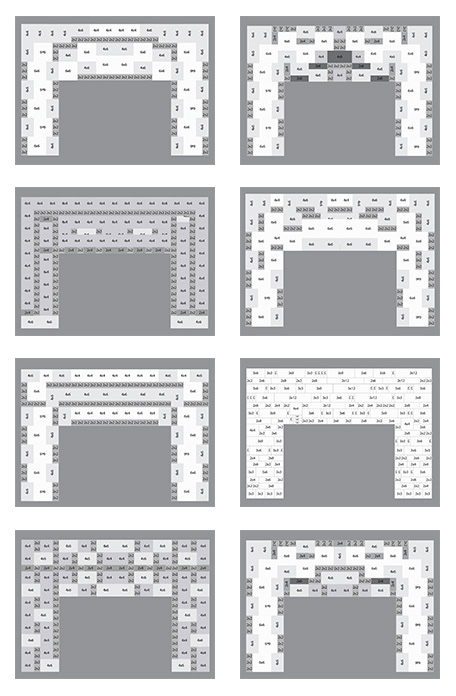 The cost was going to be less than if we had gone with Heath so we bought a few Batchelder and other colored tiles as accents. Even though the blue monster tile (Mosaic Tile Co., Zanesville, OH) didn’t fit the program I couldn’t leave it behind, because you never know when you’ll come across a blue monster tile again. 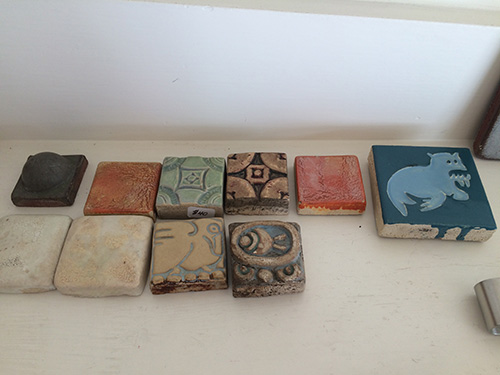 Here’s our final design. Not exactly final because we soon realized that the guys who built the firebox enlarged the box by a couple inches (they were being nice), and we had to move a row of 2×2’s from the top to the middle. Nothing too major. Phew. 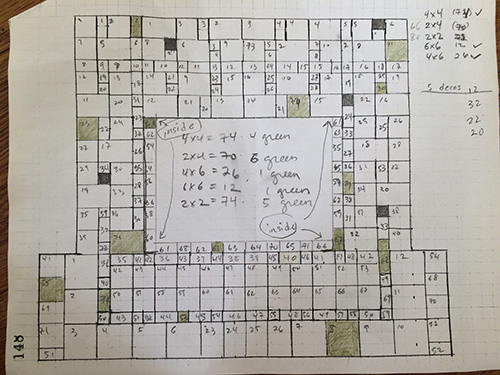 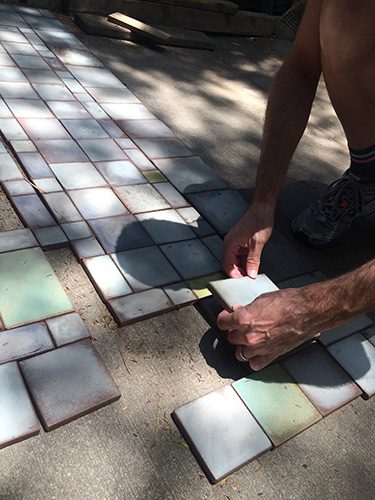 After quite a bit of back and forth about color variations and the unpredictability of glazes, and testing the infinite patience of Cha-Rie, we laid out the entire thing in front of the fireplace, and were ready to have Miguel and his amazing group of guys glue the suckers in. 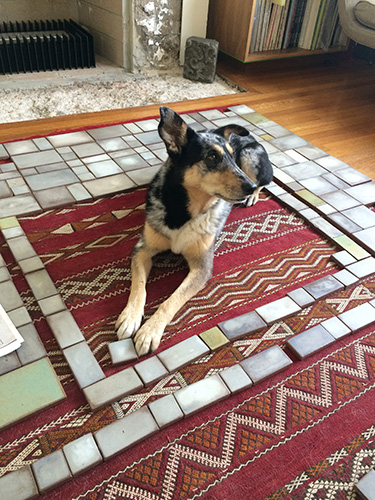 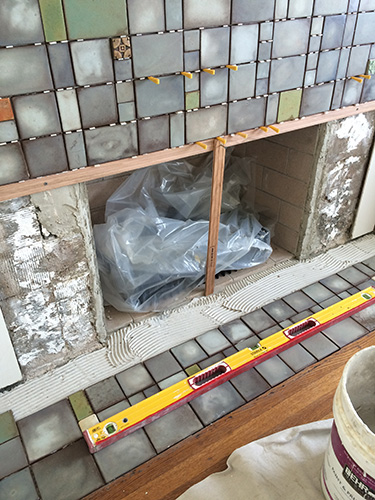 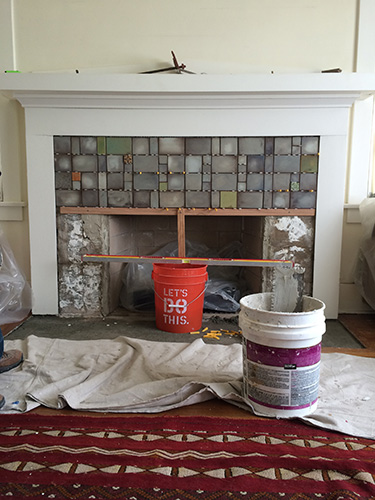 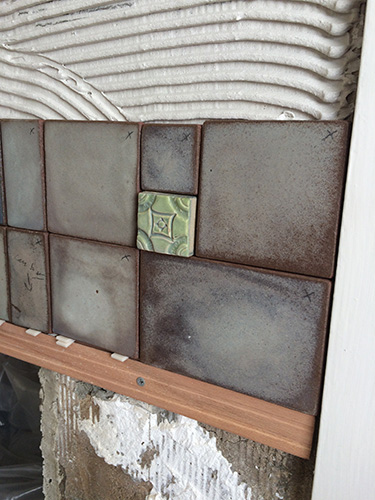 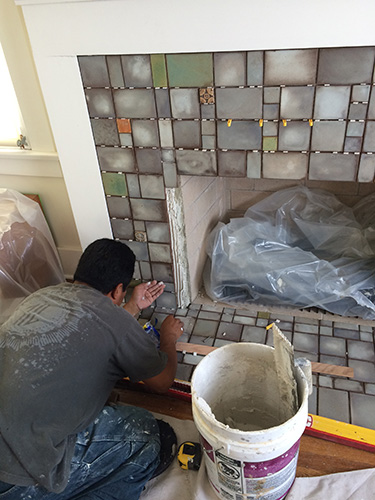 Just in time for a lazy summer in L.A. lounging by the fire. 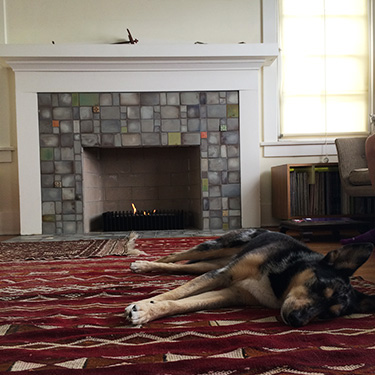