it rained dead animals left and right this week so i am only posting pictures of cuteness. 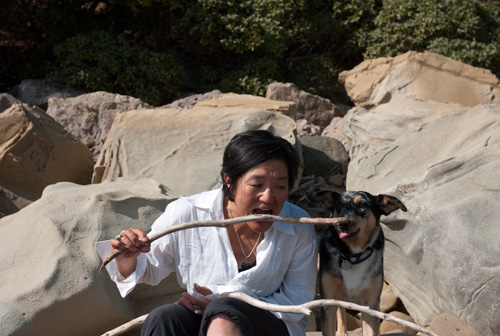 on Tuesday at dog agility class where our teacher has goats, chickens, bunnies, turtles and dogs, we found out one of the turtles had been sat on to death by its older wiser fatter friend. I thought turtles have this built-in defense, like they bring their own helmet to battle, but apparently this turtle had a faulty helmet or at least one with a bad ISO rating or whatever. a friend once told me the story about his large grandmother rolling over in her sleep on top of her chihuahua. (*smash*). the family didn’t have the heart to tell her so they just got her another dog that looked the same (i think its name was Fifi) and that was that.

even though i was tempted, I didn’t take a picture of the turtle, but then last night one of the dogs (and I know which one) did a little disco with a possum—Shake it Shake it Shake it—and so first thing in the morning i discover a dead little thing back behind my garage. I suppose even though peace has been found inside the house it’s still a little iffy out in the real world. 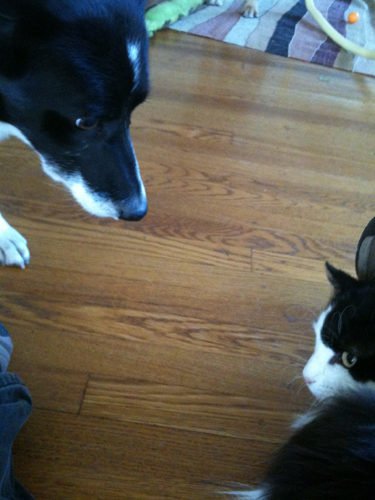 we called animal control who said we had to be present when they arrived or else they wouldn’t go into the backyard. since we were on our way out they told us the best thing for us to do was to somehow get the thing to the curb.
so David navigates a shovel to pick up the thing, which still has its tailed all curled up, likes it’s sleeping, and it’s a bit of a struggle because he sounds like he’s about to puke and he’s using all his long-limbed advantage to scoop, while staying as far away as possible. of course mr. possum resists being picked up, as most dead things do, and when he dumps it into my trash bag, all I can think of is that there is nothing like something that stiff, weighing roughly the same as our cat (without the scratching and screaming), plummeting to the bottom of a bag you have open and are barely wanting to hold on to.

so like I said no dead pics but here’s the bag we managed to get to the curb. 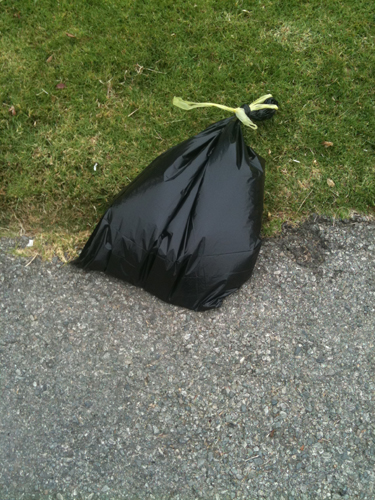 from there we went to a store that wasn’t open yet, and while waiting a freaking bird flies into the window and rolls its eyes and plops over right in front of the dog who Shook it Shook it Shook it last night and slept very well thank you very much. the bird survived but was in shock for a few minutes and then the security guard came over and just as i said “don’t touch it” he picked it up and brought it to the nearest tree.

update: it’s been almost 12 hours since possum discovery and the bag is still out there. i had a thought maybe by the time we got home it would be deflated with a little tear in the plastic, but no such luck. animal control did say to give them 24 hours. ick.