the city decided to lay down a slurry on our asphalt last week, and, giving less than 4-5 days notice, asked for all cars to be removed from 6 in the morning until 6 that night. in addition, there were several other warnings, like not to let water run onto the surface for at least three days, and even after the “curing period,” (where we shouldn’t be driving on it at all,) for the next several days we were advised not to turn the wheels unless the car was in motion.
not to worry. flyer with English on one side, Spanish on the other.
day of, all the neighbors got their cars off the street, even the jerks across the street from us who always park their van in the middle of the two available spaces (and we were so hoping they were going to get towed). too bad. then the city workers came (one of them had a highlighted map of the streets they were doing that morning, unfolded it and turned it around several times and said “where are we?”), put a lame little barricade on the fresh slurry, finished up and left around 10 am. 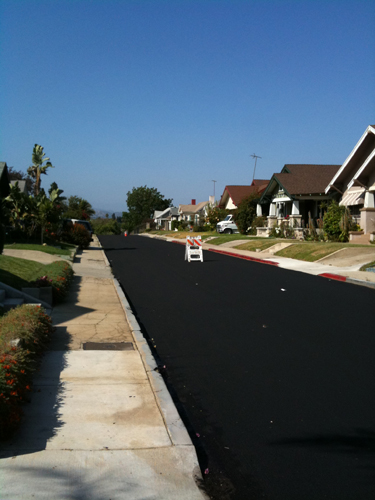 the thing about these kinds of city projects is that once they left they had no way to keep people off the street until 6 that night. there was a full 8 hours where people abused their power steering, over-watered their lawns and pulled out of their driveway, realized they screwed up, and pulled back in. the thing about wet asphalt slurry is that by the time the curing period is over you know exactly who on your block is an asshole and who isn’t. 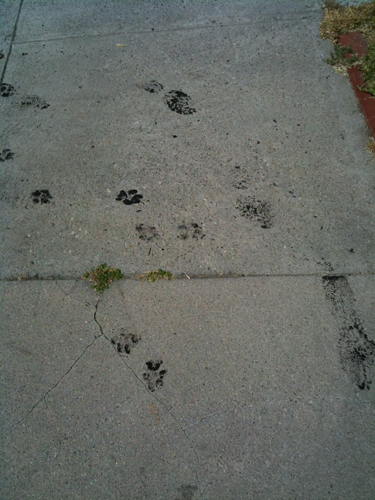