This being Los Angeles, a home is not a home without a fireplace. I’ve been told that a working fireplace bumps up a home’s value more than a working garage. That’s great because we have neither. Our house is over 100 years old and has a firebox that’s out of code (made for little people who wore the clothes that can fit inside our little closets) and topped with old sandy mortar and bricks which any small wind, pale fire, or decent earthquake could bring down… on top of our neighbor’s driveway, and their cars, and their tenant’s cars, and their tenant’s whatever’s cars.

When we first bought the house the guys from Boston Brick and Stone (of all places) told us that to rebuild the entire chimney to code would require use of the neighbor’s driveway for 2-3 weeks. Ha! We don’t need a stinking fireplace, we said.

Since then, the owner-lady next door has called David a bitch for asking her to remove a dirty mattress she leaned against our house, her ex-gang-banger son has gotten out of jail and moved in, occasionally launching into vile and manic threats interspersed with Trump-fueled immigrant bashing, Spanish love song crooning (he’s not half bad), and the magic car alarm that goes off like a timer. My favorite incident was the night he screamed at another neighbor who just happened to be walking by to call the police because he saw some sketchy people go by. This reminded me of my favorite childhood book called The Monster at the End of this Book, starring Lovable, Furry Old Grover. 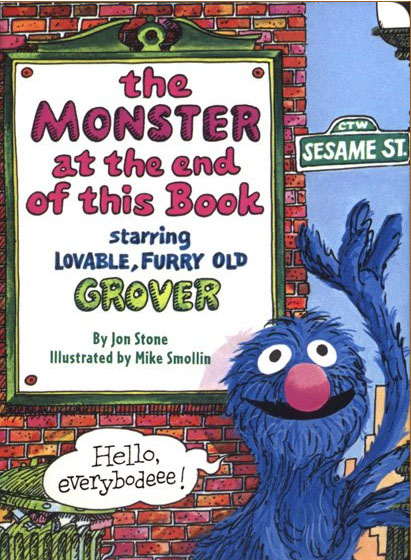 Basically, Grover is terrified to learn that there’s a monster at the end of the book and tries to keep the reader from turning the pages. Turns out… you can probably guess.

The idea of that slight wind, pale fire or decent earthquake bringing down the bricks was weighing on us, so recently we decided to take the easy way out: remove the top part of the chimney (being mindful of the house value, ahem), keep the old firebox, and install an Eco-Smart fire, since we are certainly both Eco and Smart. The chimney guys said they still needed permission for two full days of scaffolding in the neighbor’s driveway. We sighed. We fretted. We considered moving to Topanga.

Finally I asked a man next door who turns out to be the current husband of the owner-lady for permission and he said, “No problem, feel free to knock on the door and let us know which days you need the driveway. Any time.”

I almost shit my pants in surprise. I couldn’t believe it. In fact, I didn’t. The first day we needed access to cut some trees they forgot to move the cars. I don’t know how the gardener got around the situation but he managed.

Day 1.
I wake up early to see five cars in their driveway, including one that is usually always parked on the street, and I think about putting on my heart rate monitor to stay calm. I try not to take it personally, take a deep breath, and try to be grateful for the small things, like, I just got my new night guard from my dentist. Sometimes a certain behavior is not necessarily a declaration of war. 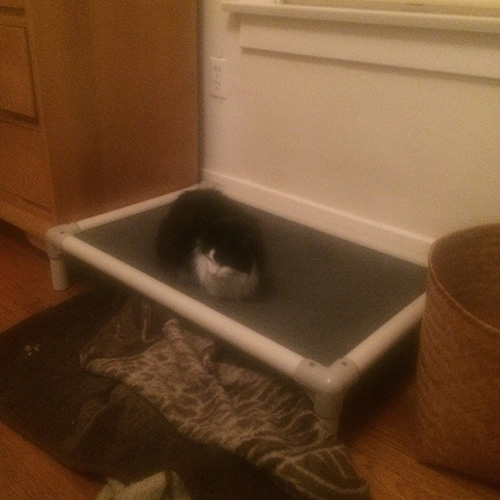 Just before the agreed upon time they come out in their cute P.J.’s, and slowly the cars move out, into the street. 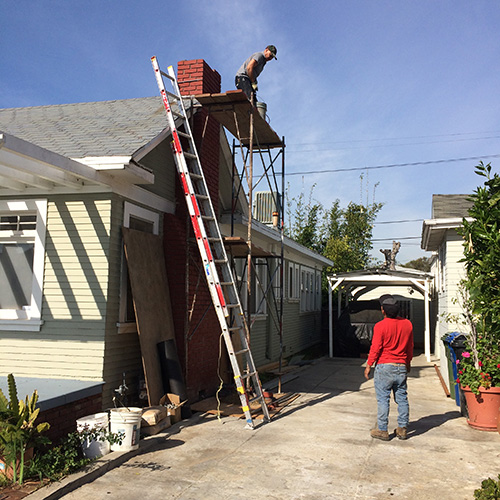 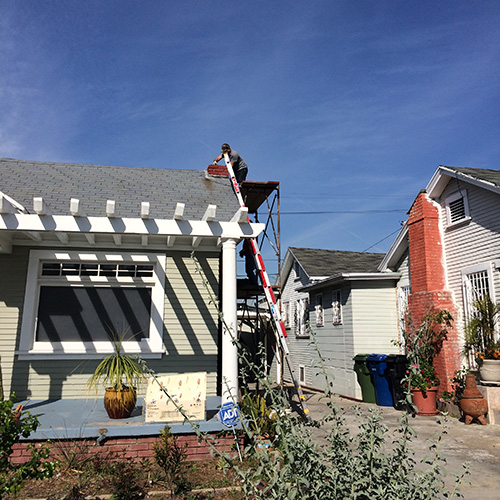 The chimney is half taken down (and it’s an easy job, just a slight tap with what looks like a toy hammer and the brick comes loose) when who should come by but our neighbor’s neighbor, who we call the hoarder. Because he is one. He’s got his little wheelbarrow filled with our bricks and he’s carting them back to his safe little place next to his house. Last year he got rid of all his crap and told us “No more! What was I thinking?” 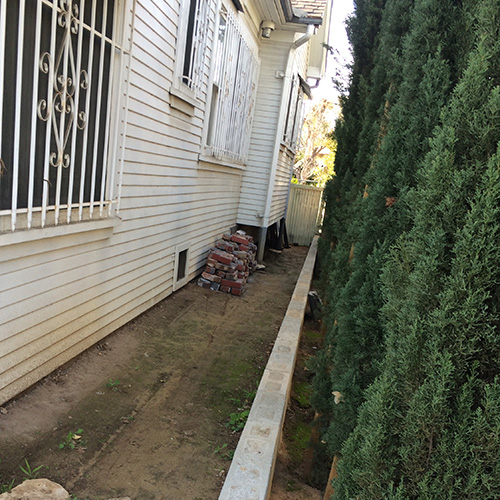 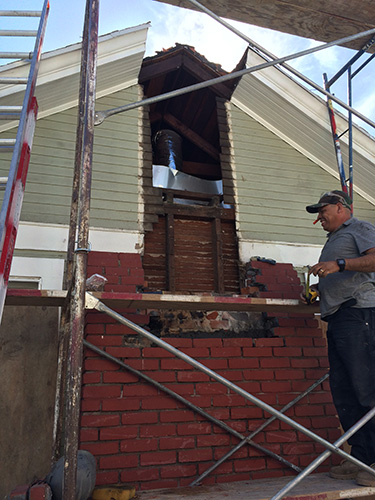 Things are going well so I decide to make some lemon bars for the neighbor. I know they like lemons. How do I know? Apparently they used to take them from the tree in the back yard when the previous owners lived here. That’s before the previous owners put up a fence in the back. Last summer our bamboo sent a shoot underneath this fence and up into their yard. The owner-lady hacked it down and sent it flying back at us like a spear. 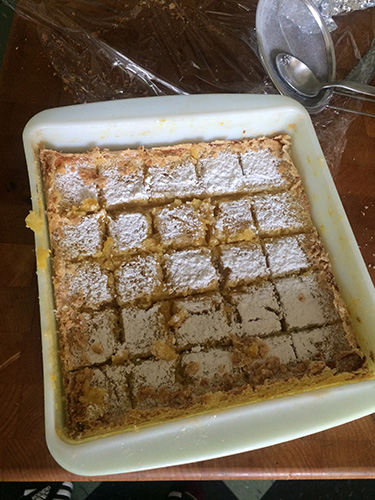 They’re not as pretty as they could be, but hey, I’m building bridges, not walls.

I pack the lemon bars up and bang on the door. And get thoroughly rejected. REJECTED! She says, without even opening the screen, that she doesn’t want anything. Nothing.

This being Tuesday there’s no place a lemon bar feels more at home than dog agility class, and there’s something very funny about Lemon Bars in Cars. 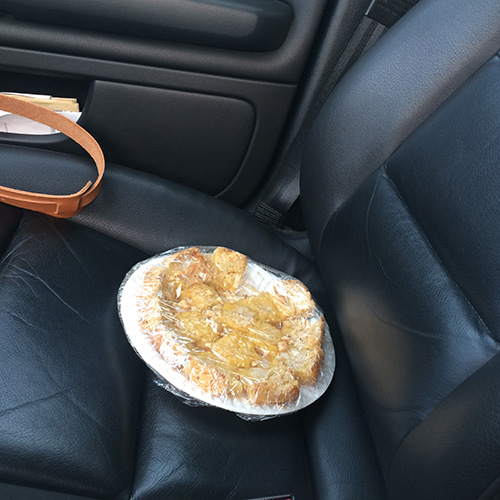 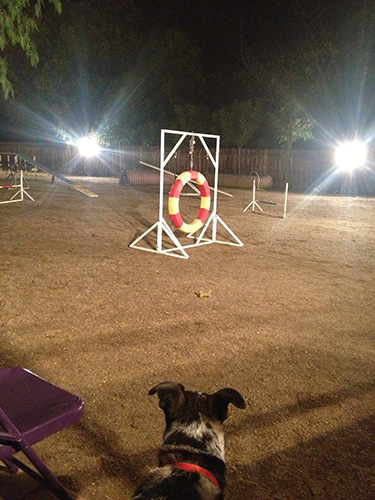 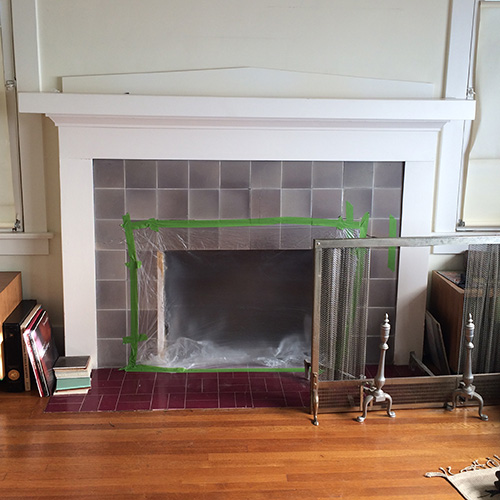