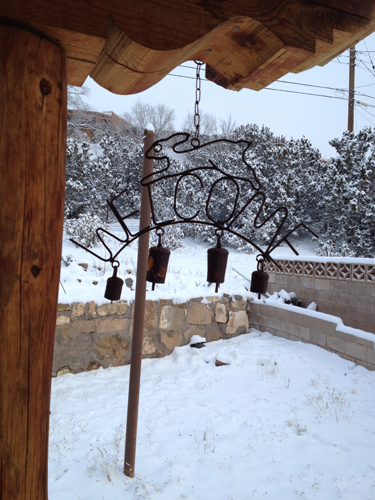 We’ve finally exhausted our Santa Fe goodwill so today we headed up to White Rock for a hike down the Red Dot Trail. 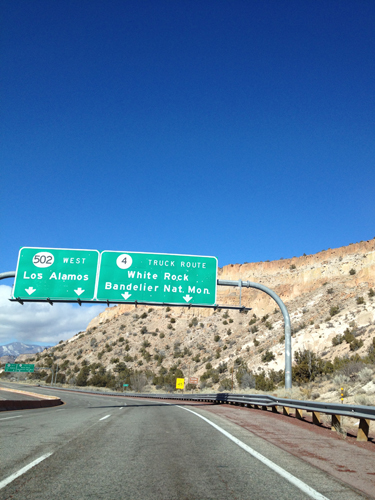 White Rock might seem like a megatropolis from the size of this sign, but it’s really a tiny little suburb of Los Alamos (population: 6000), and if you’ve ever wondered what exactly is wrong with me, well here you go. Here’s where I grew up. Literally. I mean, this was my backyard. 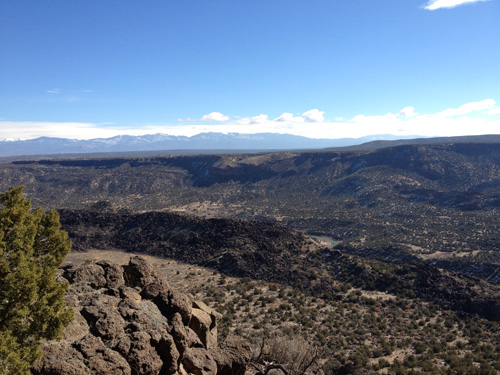 The only things that have changed since then are the well-marked trailhead, and the spray-painted red dots on the rocks (hence the name of the trail) to keep you from getting lost seem to have tripled in number. 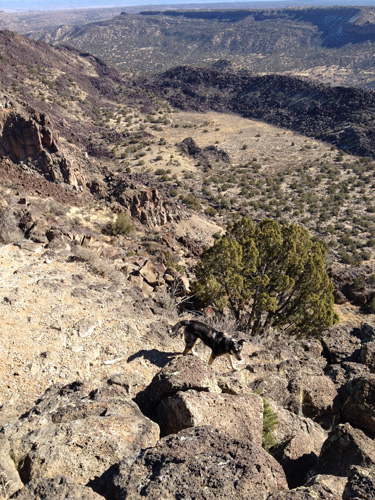 At the bottom of the canyon we found my old waterfall/swimming hole, along with pussy willows growing by the stream, which makes for perfect basket weaving if you have the time. 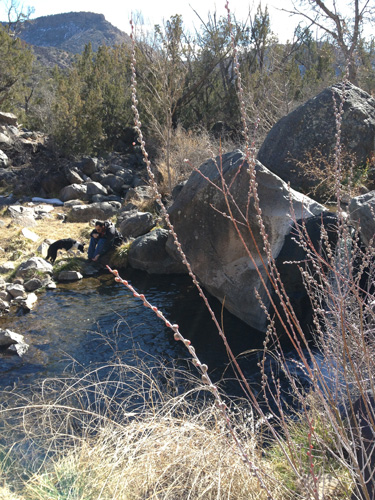 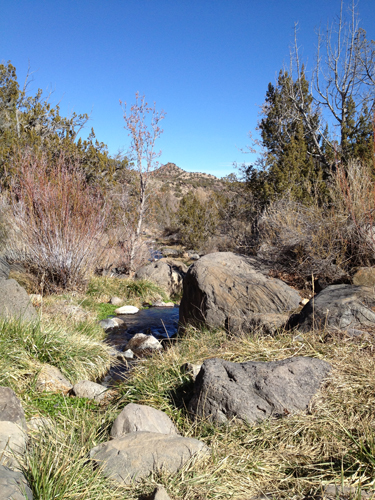 Here’s the view looking up, which is about as intense as it looks. 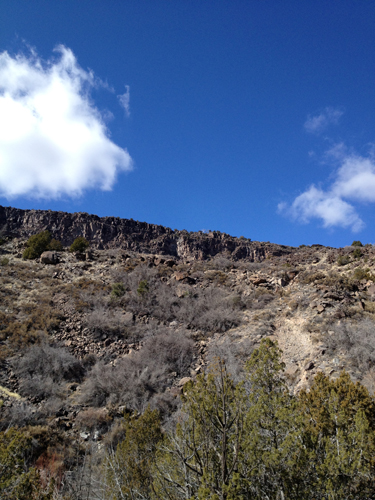 One of the dogs got into a fight with a cholla cactus, one of these, 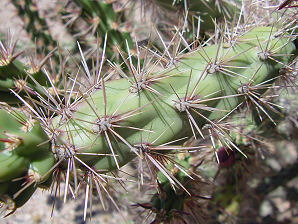 and she had a piece larger than her leg stuck in her paw in about ten places. I have to say in all my years of hiking this canyon I have never seen a dog step on a cactus so badly, in fact, I would’ve taken a photo of her prickly limb, only PETA would’ve probably come after me for the delay in pulling that damn thing out. Which dog? This one… 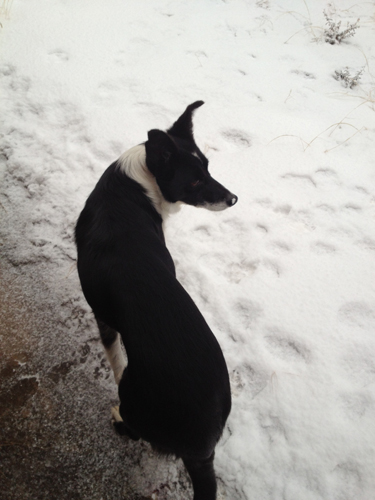 On the very nice signage at the trailhead i was especially proud to read the most reasonable rules—well, more like FYI’s then rules—about dogs off-leash, especially this bullet: “Unleashed dogs may intimidate other hikers and their dogs, depriving them of the peace the forest provides.” Indeed. While we were huffing and puffing our way up we passed a hiker on his way down (why are they always German?) with his dog. Before we reached the top, he had somehow made it all the way down and then came all the way back up to lap our ass. To make it even worse, when he got to the flat area before the road he jogged to his car. Jogged.

We and our unleashed dogs were not in any way intimated by this performance. We took advantage of the very light traffic in this part of New Mexico to prove that what matters is not how fast you cross the road, but how you do the crossing. 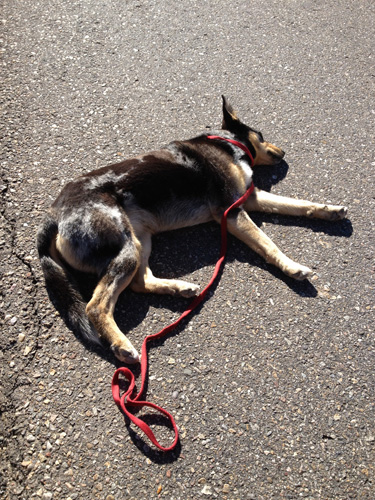 After the hike we cruised Los Alamos, which included walking over a frozen Ashley Pond, which should really be called Ashley Pond Pond, since it’s named after a guy named Ashley Pond, a favorite drunken teenager thing to do. 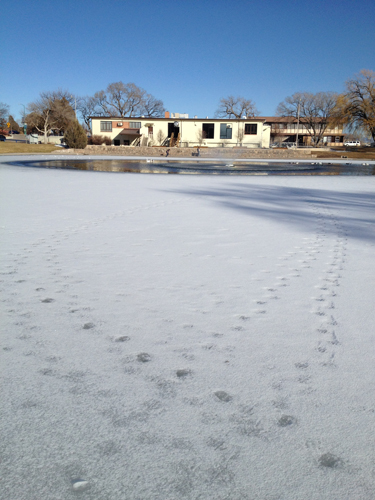 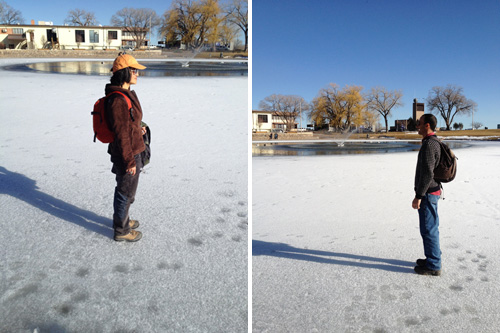 That building in the background is called the Community Center, and there is where I danced to Ultravox and Echo and the Bunnymen and Black Sabbath. Yes, in the same night. Los Alamos is a pretty weird place. Here’s my old jazz band teacher rocking the bistro, 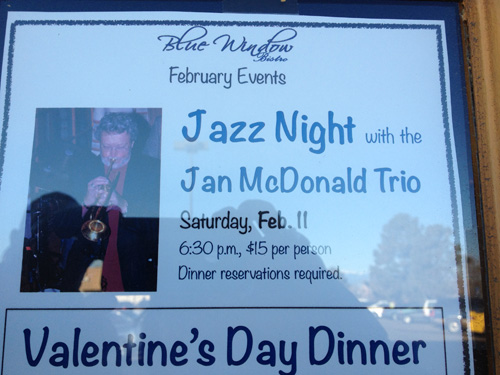 and here’s the best mushroom cloud with battleships I have ever seen. I have made a lot of cakes as school projects in my past, but I could never dream of anything as good as this. 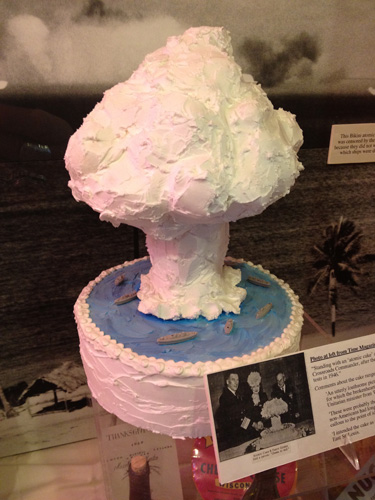 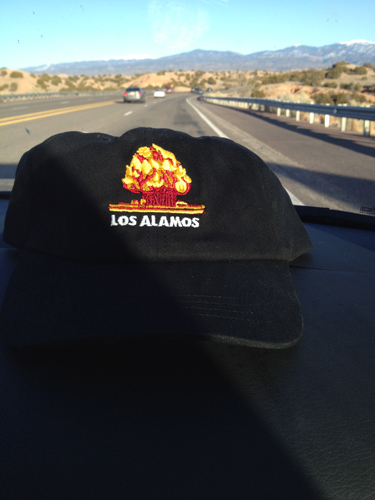