in high school my brother and i had a friend named Dean who was obsessed (on alternating weeks) with brown dogs and when Boston’s third album was coming out. in those days OCD was rarely diagnosed, especially in New Mexico, and we took his did-i-lock-the-car did-i-lock-the-car did-i-lock-the-car neurosis in stride, like we did his musical odes to brown dogs. Boston had just finished their 7xPlatinum second album and every station in New Mexico promised a soon-to-be-released THIRD album followed by a visit to Tingley Auditorium. the wait for poor Dean grew from two years (the unfathomable time that had elapsed between the first and the second album) to forever, where we all got a little older and went to college and forgot (at least me) about the whole thing. only every time i hear a Boston song (which is every half hour in New Mexico, and i just spent two weeks there) i always think i should google to see if that third album ever came out.“So many people have come and gone…Their faces fade as the years go by…”

today i finally did it (ok, truth is that i heard a Foreigner song, which reminded me of Boston) and discovered lo! that third album did come out! whoa! 8 years!

and so here, 20+ years later, is my ode to Dean. Boston and a brown dog: pure love. pure love. 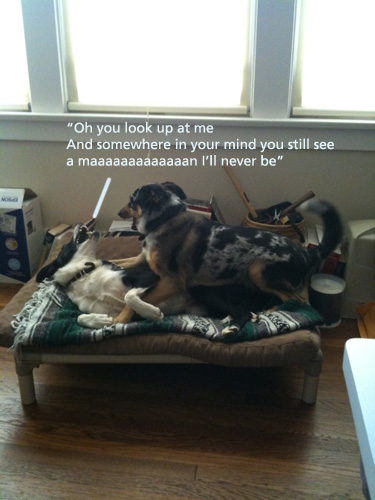