It used to be that whenever I saw a car with a New Mexico license plate I’d say “Ooh, I wonder if I know them?” It drove all my friends crazy, for the first few years of college when I actually did know most of the happy yellow plates that went by, and then because I kept on saying it even after California seemed inundated with them.

A convergence of people from Los Alamos, however, calls for some kind of vortex. Add to the evening an almost full moon and you know it’s going to end in a bust by the LAPD. Last night at the Talking Stick Coffee House in Venice, two of my dear old friends from high school played music on guitar and percussion. In total there were four of us from Los Alamos, one from Albuquerque and then the old guy that went on after them said he spent his formative years in New Mexico. Let the vortex begin.
I have to say the music was incredible, but I knew that. That was then, and this is now. 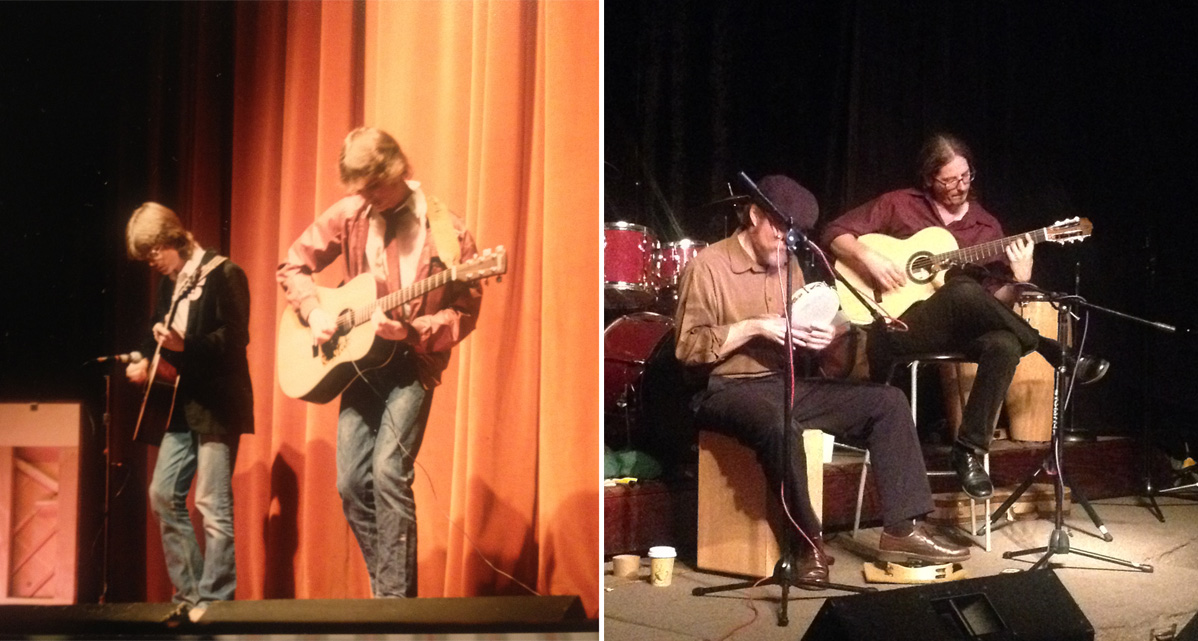 Dan Ward was a trumpet player before, and now he plays classical guitar with hands any Spaniard would die for. John Bartlit turned a tambourine into an art form you want to spend your whole life trying to learn. His excuse? When you ride a camel all you have is a tambourine. It must be able to be played as a bad ass instrument.

After their set some guy came to the cafe and there was a transaction where money was exchanged for a telescope. The woman who bought the telescope looked it up and down, through it and at it, examining everything except for the almost full moon. We stood in the parking lot, discussing stars, what else. On a backpacking trip you can tell the people who are from Los Alamos because they’re the ones who pack dental floss. Looking up at the stars it’s the Los Alamos people who say there just aren’t as many as there used to be. Someone made a joke that it must be because some of the stars burned out, but the Los Alamos response was that actually many of the stars we see are burnt out, and yet they’re still there, waving.

Dan reminded us of when some fool paid John, Dan and myself to play jazz at a wedding, and John said yes that was ridiculous. “You had your trumpet propped up on a bunsen burner.”
It was my one and only paid gig as a musician. Time was ticking. The yellow plate state rules, but the vortex has a limit. Soon the cops came full speed into the Subway parking log, busting a Datsun hatchback or Chevy Nova. Of course I had to go and see what color the plate was.