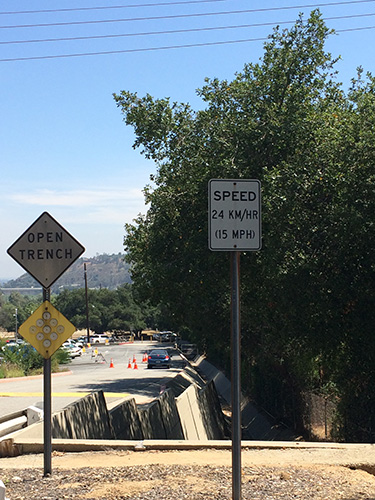 When the sign in the parking lot shows the speed limit in KM/HR, you know you’re in for some serious science. Last weekend was the Open House at the Jet Propulsion Laboratory, and the freeway signs near Pasadena were bubbling over with excitement like it was beaujolais season. “Hurrah! It’s here! A Ticket to Explore JPL – this way!”

There were also cops in extra-large and extra-darkly-tinted vehicles at every major intersection, and IDs required for entry (tickets were free but had to be reserved in advance). It occurred to me as we drove in that there was going to be enough people at this event to warrant a terrorist threat. In space, if we detected an asteroid that might hit us, JPL would probably launch something to swing the asteroid off its path or actually collide with it (depending on who’s president). But here on the surface of Earth, if something’s going to hit us, we have to rely on good old-fashioned bag searches and vapor-waking dogs. But then again, some of my friends used to joke that as kids in Los Alamos during the cold war we were safe from getting bombed because wouldn’t the Russians want to keep all our scientist parents alive? 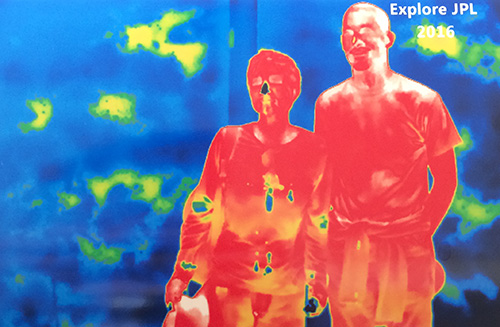 Having attended a few “Family Days” at the Lab in Los Alamos I’m always wishing for a little less hype and more day to day stuff at these types of events. For example, the real JPL mission control room pales in comparison to a “Control Center” fabricated for the movies, but there is nothing like seeing the ID-activated vending machines that track the use of special machining drill bits and tools, the safety glasses overflow storage, or old soap dispensers from the 60’s. 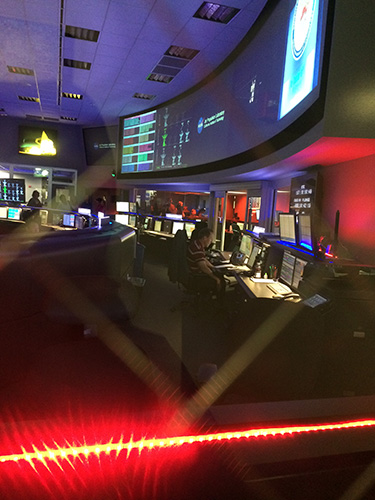 NORAD Control Center from the movie WarGames (when that red light starts to wail, well…): 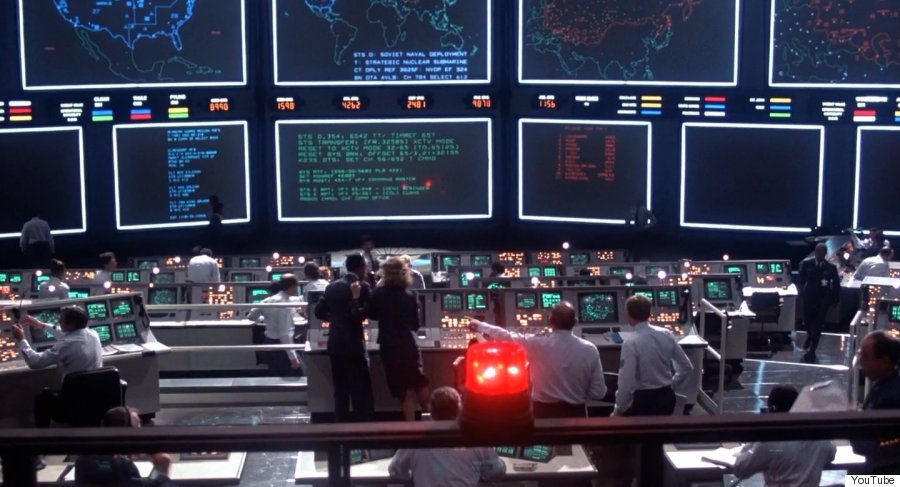 Plus, all the obtuse illustrations and charts of data that are scientifically significant but don’t look good on social media are hanging in the hallways you can’t get to, and you can only put your nose to the glass to look into the labs with nano-technology experiments sitting on top of Laminar Flow Isolating table supports (awesome for playing air hockey). 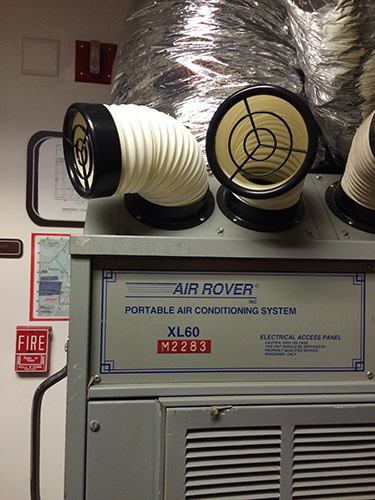 But there’s nothing more fun than watching the real Mars rover crawl over some Southern Californian rock, and then laying down and getting rolled over by its little cousin. Apparently each wheel has its own engine. Felt like some little kid next to me kept elbowing me to move over. 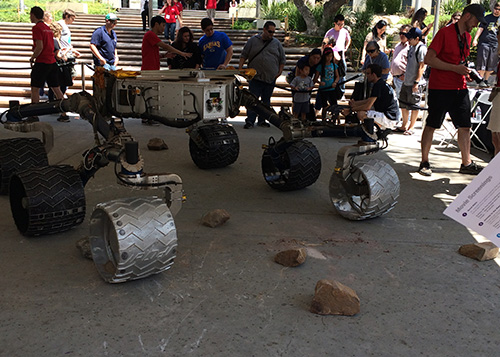 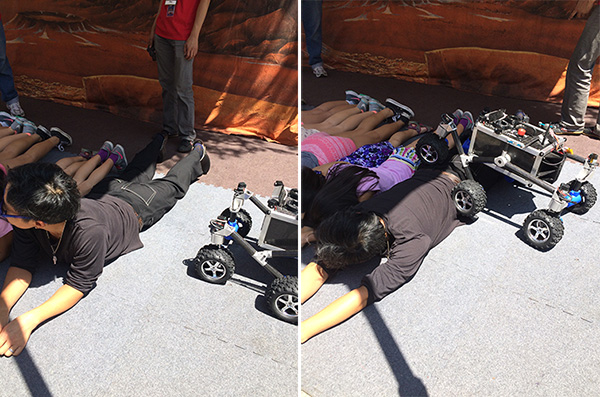 They sure have tire tread all figured out. 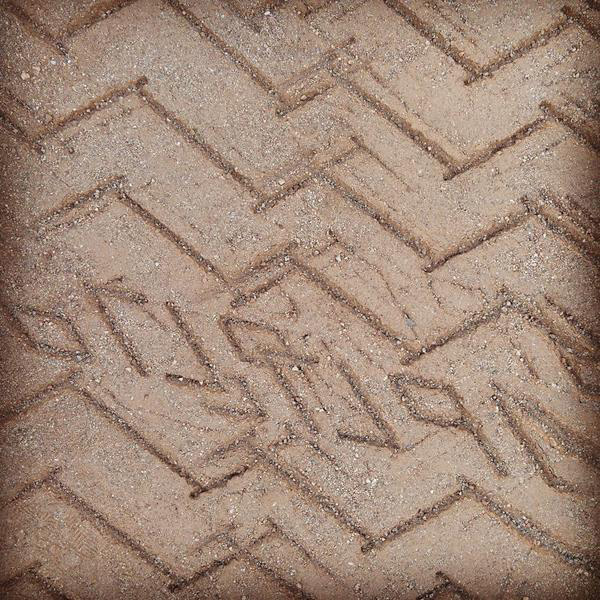 We skipped the long wait for the Spacecraft Assembly Facility, after hearing the guy say, “If you can hear my voice you’re looking at a 45 minute wait for about a 5 minute visit,” opting instead for the guy who lured everyone with a: “Welcome to the solar system where we’ve got AC.” 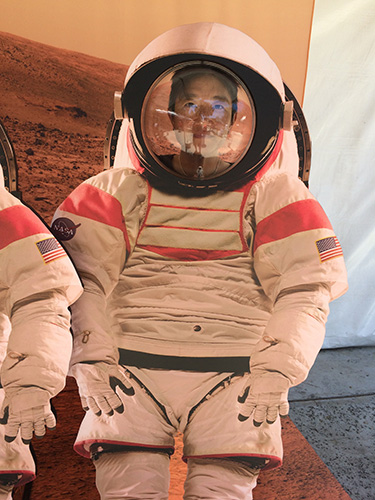 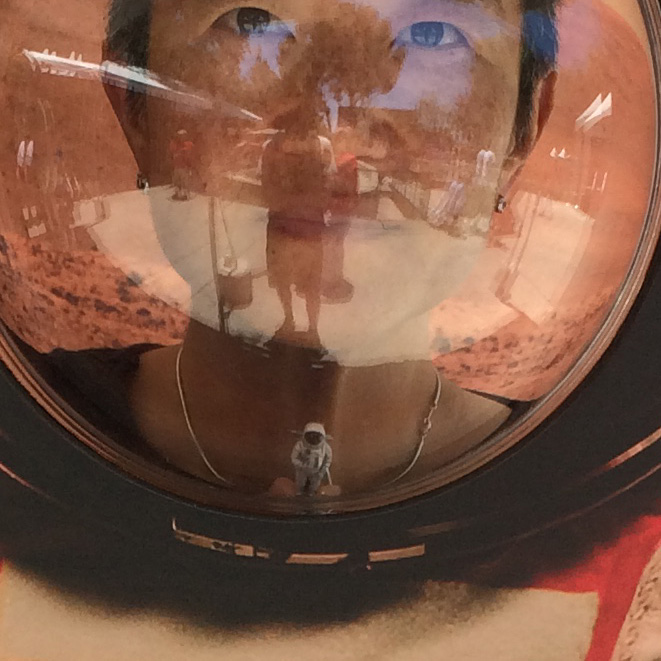 My story about an asteroid named C#41 who crashes into the moon was just published at Entropy so we paused in the middle of the solar system and had a wake for the little guy. 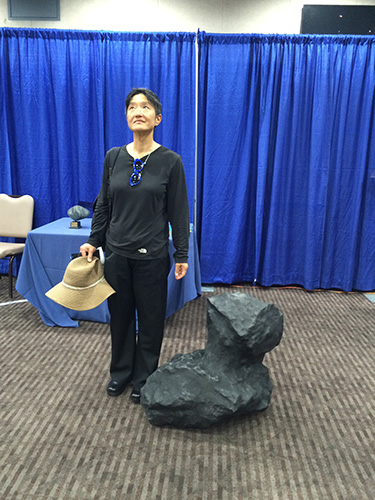 A visit to the Fabrication Facility AKA the machine shop put any resemblance to Disneyland out of my mind, but the ice cold water bottles that cost $1 (A BUCK!) probably did the trick as well. At the shop there were 3-D printers, vending machines for bits and gadgets, rolls and rolls of thermal fabric. We were told the next big thing was going to be 3D printing using metal, namely powdered aluminum, which is so explosive the technician must remain completely free of charge, as a single spark will send the whole building into space. No party tricks like rubbing a balloon back and forth across the top of your head to get it to stick to a wall…

We got to meet the guy who’s idea it was to add the star to the top of this postmark. His friend designed JPL’s postmarks for years, and he told us anyone can suggest a design to the post office and they decide whether to create a stamp for the occasion. Hm… 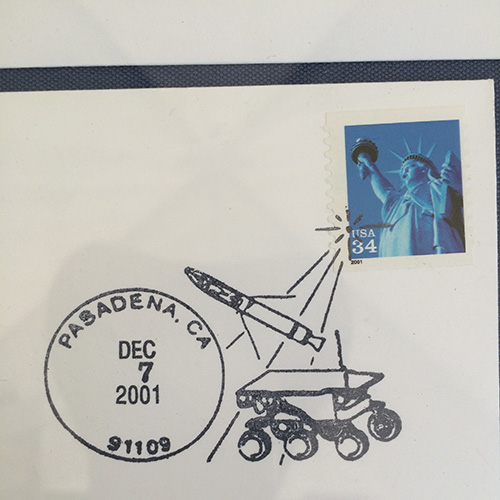 Very unlike “Family Day” at the Los Alamos Lab, there were plenty of stickers to go around, and JPL bags being given away by the dozen at the end of the day. 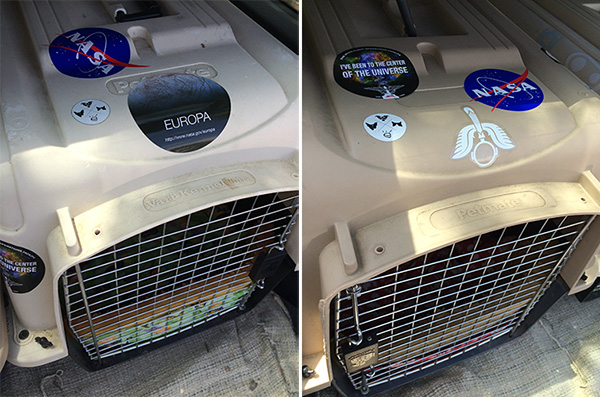