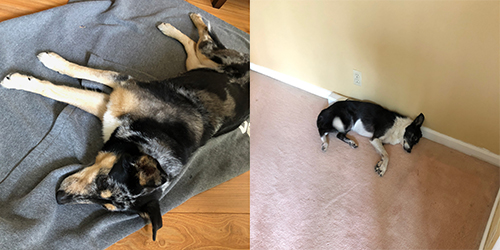 In preparation for our upcoming workshop at the Huntington Gardens on October 20, Linda and I broke down several ways in which the differences between similar teas could be seen/smelled/experienced. As I have often said before, a great tea is only great in relation to the other teas at the table. Either of these teas on their own would have been extraordinary, where it gets interesting is comparing them side by side.

We were lucky to have two samples of extremely high quality Old Bush Water Sprite (Lao Cong Shui Xian) from Wuyi Mountain. Both of these sell for over $60/50 grams. Both of these name the tea master dude who made it, we’ll call them Mr. X and Mr. W. Old Bush Water Sprite is supposed to be picked from old bushes, and where these bushes are grown governs how much mineral content is absorbed into the roots and leaves. Wuyi Mountain is karstic and volcanic and has wonderfully porous rock that enables mist and dew to permeate easily. In some areas the cliffs suck up moisture from the river and excess water trickles down all day long onto happy tea bushes. 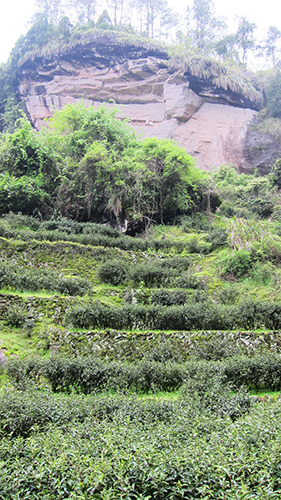 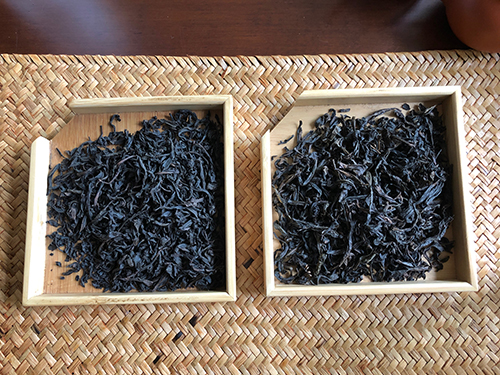 The leaves: On the left is Mr. X, on the right Mr. W.
Mr. X smelled slightly fruity, a little tangy like passionfruit, and Mr. W had more of a dark chocolate, roasted Cheerios smell, as if it were roasted for a longer length of time, even though it was actually lighter in color, with more variance across the leaves. 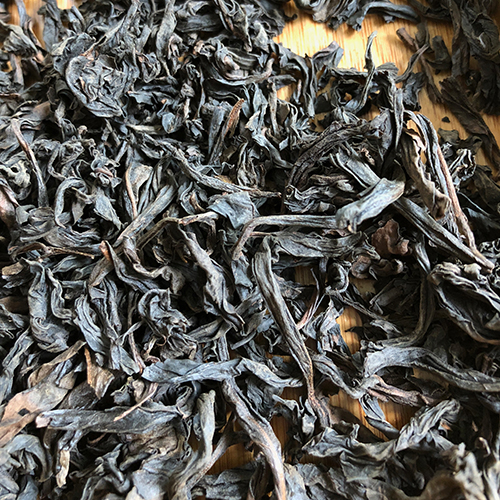 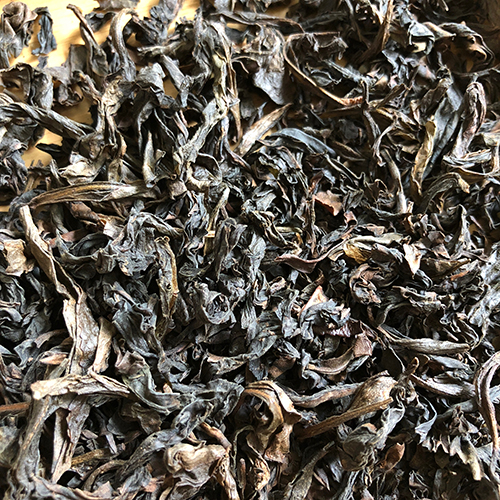 Sometimes the aromas change when you place dry leaves into a heated gaiwan. Sometimes darker, funky smells come out, and lighter, floral ones disappear. This wasn’t the case with these teas, both smelled incredibly rich and clean. 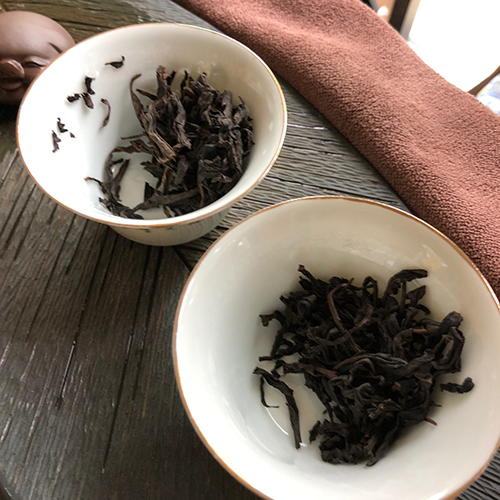 The color: Mr. X is darker, more amber red, compared to Mr. W’s golden brew. Both liquids are very clear, but the tea on the left (Mr. X) is slightly less so. Again, it’s interesting to note that although Mr. W smelled more roasted, the color of the tea is lighter, more orange than brown. 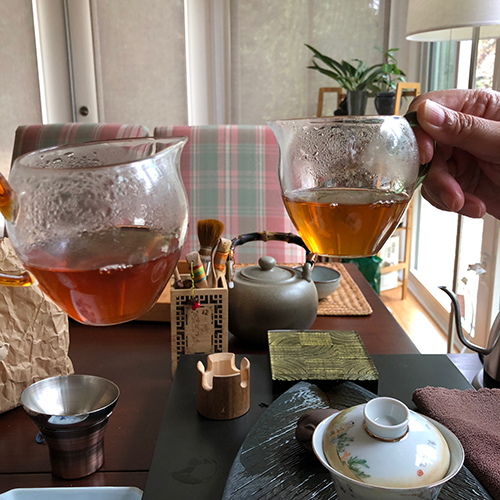 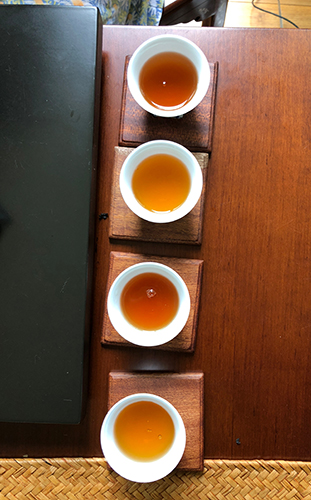 The first steep: Mr. X has a slight vanilla and ripe fruit flavor that happens right up front when you drink it, but there’s a rough edge afterwards, as if the flavor was somehow rushed, leaving a slight harshness behind on your tongue. It has an odd, thin flatness reminiscent of tea that’s been brewed with with tap water (we’re using Crystal Geyser).
Mr. W has wheat and honey notes which glide into your mouth slowly, the flavor is more noticeable after you swallow, which of course makes you want more. The tea is smoother and thicker compared to Mr. X, and becomes more viscous as it cools. There is a feeling that the gaps in between your teeth have been filled with some fancy lubricant.

The fourth steep: We lengthened the brewing time for the subsequent steepings, to see if that made any difference. Mr. X remained slightly edgy, until the fourth steep, when all of a sudden the slight roughness seemed to go away. Oddly enough the tea started to taste rounder than the previous steepings. Mr. W remained a smooth cool cucumber. It would have been interesting to continue brewing, to the tenth or twelfth steeping.

The cup: After five steepings we smelled the empty cups. The aroma from Mr. X was feint and barely perceptible. Mr. W smelled like flowers and honey, and this was still the case after leaving the cups alone for several minutes while we went on a tangent into Hunan Fu Zhuan, which quite literally is drinking tea with mold on it. 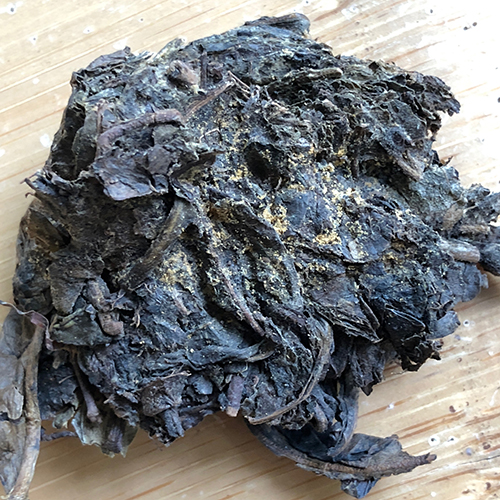 The yellow spots on the tea are spores from a fungus called Jin Hua that is cultivated in rice or wheat flour. The tea is inoculated with the fungus and gives it a very sweet taste. I’m not sure how tea is inoculated and why Jin Hua tea is associated with Mongolian Diet Tea but I’ll be sure to find out.