This week in the world of “Tea vs. coffee” debates I know for sure if some dude does a rookie move at the Velodrome and crashes into you, and you break your wrist, it’s far easier to make an espresso than to brew tea. 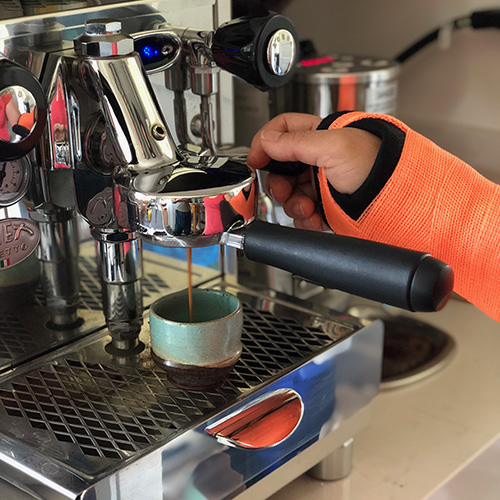 Obviously it’s easiest to just have someone brew tea for you, so head’s up on two upcoming tea tastings with 1001 Plateaus and Bana Tea Company at the Huntington Gardens.

– Saturday, September 15, 2018 at 9:00 AM – “Tea Tasting: The Basics.” We will discuss brewing methods, factors that can affect the overall quality of one’s cup, and storage, as we taste rare and high-end teas from the six major categories.

– Saturday, October 20, 2018 at 9:00 AM – “Tea Tasting: Subtlety, Complexity and Beyond.” a workshop that is focused solely on tasting: We will taste specific flavor profiles of the major types of tea and then examine the often wild variations within each category. (Tickets go on sale one month prior).

Linda and I planned to get together and figure out what to do for our “Tea basics” tasting but didn’t quite get there. It was hot, it’s been hot, and the Thai place offered us free mango and sticky rice to go with our three other dishes, so we ate all our sticky rice and didn’t worry about the basics. 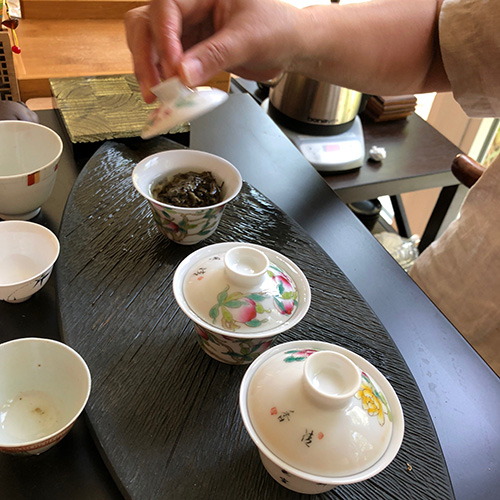 We started with three raw teas from Mengsong. 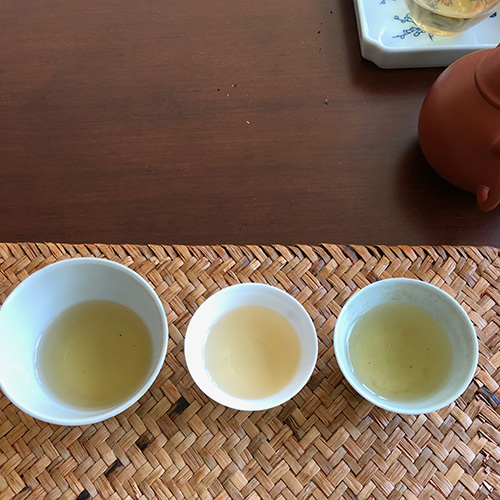 Xiao Cao’s Mengsong Fall tasted quieter, softer than his spring tea but with the same smoothness and detail, like slightly muting the tone of a color photograph. Both of Xiao Cao’s teas were thicker than the tea made from 100 year old trees, a great way to understand how 100 years is a spring chicken as far as pu’er trees go.

I get a lot of comments as to how tea is confusing: how some wild tea trees used to be farmed many years ago, or how “wild” depends on which animal has or has not pooped on its roots, or how does something like the half-raw/half-ripe get explained.

One tip I’ll always stand by is you should always brew tea using spring water from the same area that the tea was grown in. At least it makes agricultural sense even if it’s not practical. Maybe the next best thing is to use the local spring water to ferment your ripe pu’er, which is what makes Vesper Chan’s 2018 Enchantment of Ancient Trees so amazing. At first it tasted like a crazy candy bar because of the gan from the earlier teas, which caused more confusion for a minute. 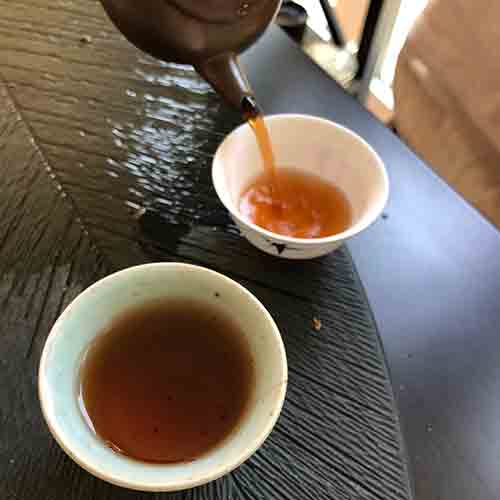 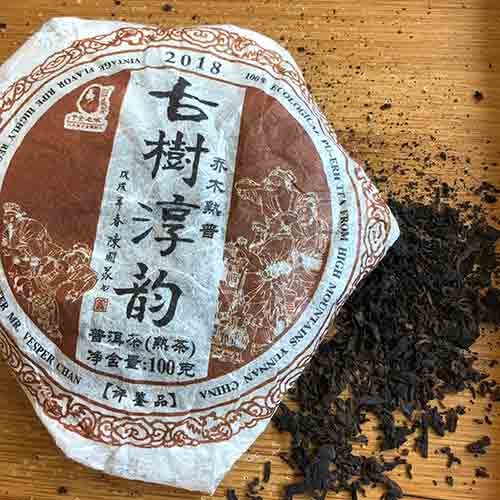 It had a strong raw cocoa bean taste, and no deep earthy tones, which tends to be one-dimensional and boring in most ripe teas. It was also super thick and bold, and didn’t taste like a new tea. Because, just to add to the confusion, this tea is a 2018, but it was made in 2015. What was it doing for three years? Hanging out in a controlled environment. 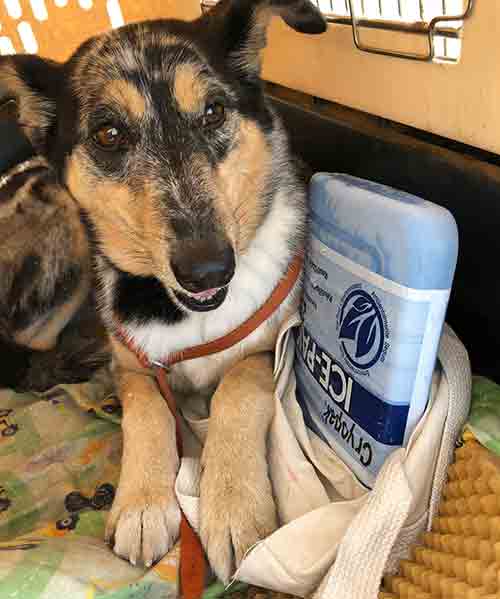 We compared this young tea with the enormo-brick (a hefty one-pounder) from 2010 called Chang-An which was probably made by the same person (Vesper Chan’s ripe pu’er dude). 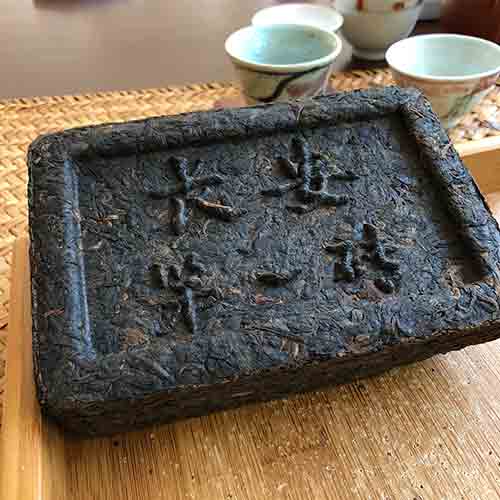 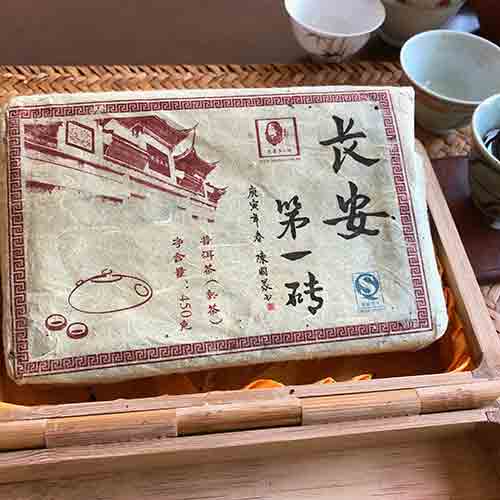 It had a similar cocoa bean flavor, no earthiness, and hint of something tangy like dried currant. Eight years (plus/minus three) has given it a lot more flavor and richness so we encouraged the Enchantment of Ancient Trees to do some additional hanging out. Note: no way you can break off a piece of that brick with one hand. 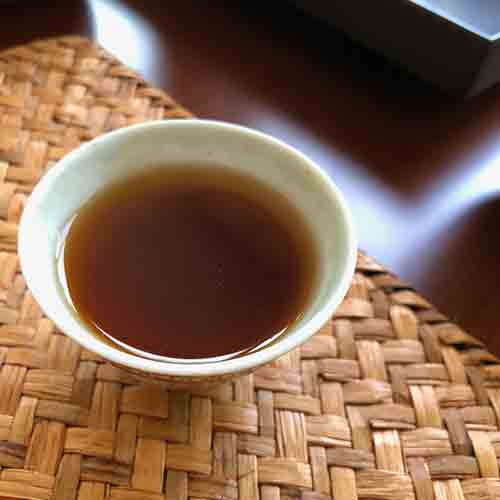